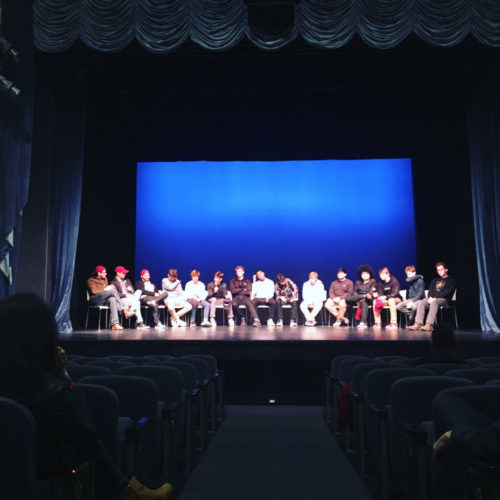 On April 15th, Kate Mueth and the Neo-Political Cowgirls in partnership with Hamptons International Film Festival presented a free screening of short films created by participants of their workshop for high school boys, Dude’s Eye View.

Sponsored by The Derek Institute, the six week workshop meeting once a week at the East Hampton High School, DEV created a space for friendship, idea-sharing, communication support, and a creative net for young men to express their views, feelings and concerns through the outlet of film making.

Teaching Artists Charlie Westfal and Trevor Vaughn, actors from New York City and NPC Project Hero Teaching Artists, lead the participants in warm ups, theater games, conversation, and image and film critiquing to guide them to their final product. Process-focused, DEV engages the boys to courageously put to image what they most care to share with the world.

The films, screened in The John Drew Theater at Guild Hall, were uncensored, bold, and explored such issues as love, fears, violence, and comedy.

There was a Q & A talk back with the participants and the Teaching Artists led by actor Sawyer Spielberg with incorporated questions from the audience.

Asking the boys if they felt any fear in exposing their opinions and creative efforts at any point during the program, the responses were honest and self-analyzing. One response from high schooler Nicolas Villante related to the fear when he lost all his work near the end of the session and how he realized that “….. sometimes you have to start from scratch when things don’t work out as planned.”

Returning DEV student and EHHS senior Steven Verdugo was highly animated and excited talking about how he learned “Having passion about something, anything, makes life better and worthwhile.”  Verdugo recently was told the good news that he was accepted to the Film School at SUNY Purchase, a highly competitive program.  All of the boys shared how they “Learned to rely on one another and how good it felt to show up for each other when someone was stuck or needed help.”

Lee Foster, who heads The Derek Institute, the group who funded the DEV program, said “Viewing the short films created with the help of these two dynamic male teachers, [I saw how] they spoke the same language reflecting adolescent imagery and societal contradictions. …. [The workshop] permitted these young men to investigate themselves. Wrought out of subjective, pertinent bio-social elements that confuse us all, but created and ultimately projected through the cognitive foundry of thought. Outstanding. Kate Mueth has encouraged the notion of knowing oneself and what it is to ply every crevice, get into the substance of feeling and form.”

A participant’s parent, Soozy Miller, said “This empowering program is another net cast to help our kids discover their voices and offers a healthy coping mechanism for all the incredible challenges that today’s world is presenting them. It’s changed my son’s perspective in wonderful ways.”  Screening attendee Jill Musnicki’s reaction on Facebook was “What an impression it made! We loved and discussed every film we saw tonight. We also enjoyed the talk with the filmmakers afterwards. Bravo to all involved. Important work!”

Teaching Artist Charlie Westfal welcomed the audience before the screening and concluded with “This program made by Kate Mueth and The Neo-Political Cowgirls is everything that is right with Art today.”

A girls version of the program, called Girls Gaze, will start its pilot program at The East Hampton High School this coming fall.

To learn more about this program, how to support it, or how you can bring this program to your school, contact Susan at npcowgirls@gmail.com. 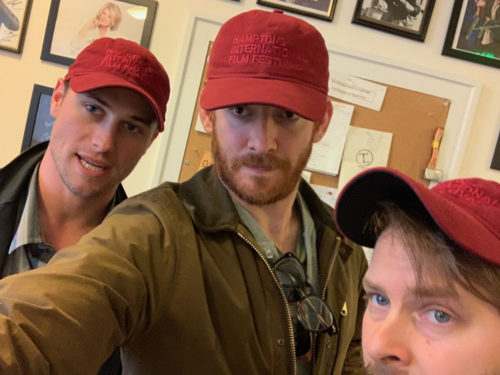