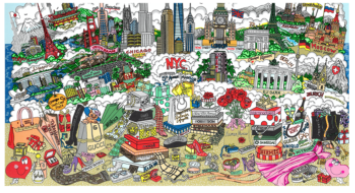 Charles Fazzino’s ‘9/11: A Time of Remembrance’

Fazzino’s new limited-edition artwork to memorialize the 20th Anniversary of 9-11, will be showcased alongside a curated set of the artist’s signature pieces at the gallery. The special Charles Fazzino exhibition will be on display through September 23rd at Carlton Fine Arts Ltd. location at 543 Madison Avenue, New York, NY 10022.

Charles Fazzino’s painting entitled “9/11: A Time of Remembrance” was commissioned by The National September 11 Memorial & Museum and is an homage to all those affected by the 9-11 attacks including victims, survivors, and heroes. A portion of the proceeds of the sale of “9/11: A Time of Remembrance” and limited-edition prints will benefit the National September 11 Memorial & Museum.

Charles Fazzino states, “It is so very humbling to have been commissioned by the National September 11 Memorial & Museum to memorialize the 20th Anniversary of 9-11. My artwork was created as a homage to all those affected by the 9-11 attacks including victims, survivors, heroes and all of us who just watched the Twin Towers fall that day.”

Carlton Fine Arts Ltd. is located at 543 Madison Ave, New York, NY 10022 location. Exhibition hours are Mondays – Thursdays: 10 AM – 6 PM; Fridays: 10 AM – 4 PM; Saturdays: Closed; Sundays: 11 AM – 6 PM and by appointment. For those interested in checking out the exhibition outside of open hours, appointments can be scheduled by calling 212-593-2800 or email: info@carltonfa.com. Visit http://carltonfa.com/, for more information.