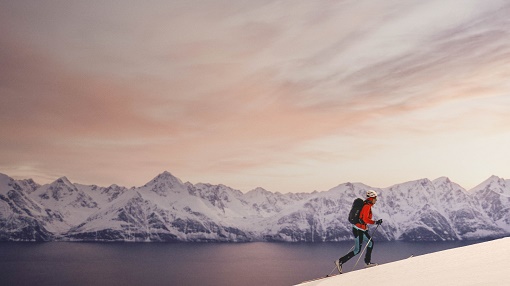 Mission Dolomites Directed by Killian Bron
French freerider Kilian Bron takes his mountain bike on a via ferrata in the Dolomites, where he faces impossibly tight turns, hair-raising exposure and massive consequences for the smallest error in line choice. No you didn’t, Kilian Bron. Yes, he did. (France, 2018, 6 min.)

Lazarus – Directed by David Darg
Lazarus documents the real risks that people with Albinism in Malawi live with each day, as kidnapping and murders take place because of the unfounded beliefs in the power. Lazarus is quickly becoming a leader in the movement towards change with people with Albinism, garnering support from the United Nations, Amnesty International, OXFAM, The US Ambassador in Malawi, and people in the music and film industry rallying behind
Lazarus to end the killing and violence toward people with Albinism.

In the high steppe of Little Tibet, a young boy develops an unlikely obsession: ice hockey. He fashions pucks out of stones, trains on homemade skates and worships Czech hockey icon Jaromír Jágr. And he has his heart set on an outsized dream. (Czech Republic, 2018, 2 min.)

Dawa Directed by Anna Callaghan
At age 9, Dawa Yangzum Sherpa told her teacher she wanted to climb Mount Everest. It may have seemed improbable then, but she’s long smashed notions of what’s probable. The first woman from Nepal’s Rolwaling Valley (home to 70 notable male climbers) certified by the International Federation of Mountain Guides Associations, Dawa is one of only about 100 women among IFMGA’s nearly 7,000 guides. “Who I am now is just because I climb,” Dawa says modestly, as images of peaks she has summited flash on screen — K2, Yala Peak, Lobuche, Chekigo, Kanchenjunga, Cho-Oyu, Ama Dablam — and, of course, Everest. (USA, 2018, 3 min.)

Ashes to Ashes Directed by Taylor Rees
America has yet to heal from the trauma of its darkest era, and Winfred Rembert is living proof of that. Rembert, who lived on a plantation, joined the civil rights movement as a teen and was put to work on a chain gang, is a rare survivor of a lynching attempt. Decades later, he still carries the scars. “That lynching is on my back, and it’s dragging me down, even today,” he says. As he etches the history, bloodsoaked and cruel, into leatherwork, fellow artist Dr. Shirley Jackson Whitaker organizes a different kind of ceremony to search for healing. “It’s not just black history,” she says. “This is American history.” (USA, 2019, 26 min.)

Sean and Adrian, a Two-Spirit couple are determined to rewrite the rules of Native American culture through their participation in the ‘Sweetheart Dance.’ This celebratory contest is held at powwows across the country, primarily for men and women couples, until now. (USA 14 min)

The Wild Inside Directed by Andrew Michael Ellis
“Saying goodbye to an animal – it’s hard,” says Chris, who is leaving Florence, Ariz. State Prison after serving a sixyear sentence. He’s one of 30 minimum-security participants in the prison’s pioneering Wild Horse Inmate Program, working five days a week to “gentle” the wild mustangs, which are saved from slaughter. Training them as saddle horses keeps recidivism at bay in Arizona, where inmates face a 49 percent chance of reincarceration within five years. Since 2012, only three of the prison’s 53 WHIP trainers are back behind bars. (USA, 2019, 15 min.)