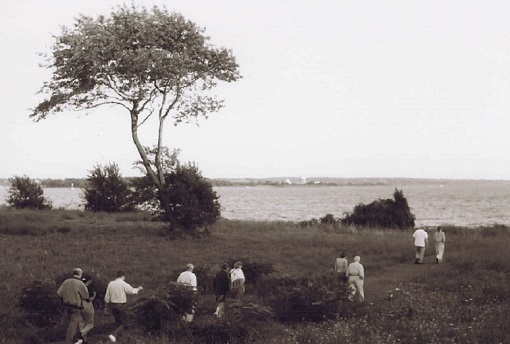 Screening of TRACES OF THE TRADE: A Story from the Deep North

Followed by a Conversation with Producer/Director Katrina Browne

TRACES OF THE TRADE: A STORY FROM THE DEEP NORTH
An Emmy-Nominated film by Katrina Browne with Co-Directors Alla Kovgan & Jude Ray, and Co-Producers Juanita Brown & Elizabeth Delude-Dix

First-time filmmaker Katrina Browne discovers that her New England ancestors were the largest slave-trading family in U.S. history. Nine fellow descendants journey with Browne to retrace the steps of the Triangle Trade. They gather in their old hometown of Bristol, Rhode Island; disturbing historic documents require a rethinking of American history as the 4th of July parade rolls by. They quickly learn that slavery was business for more than the DeWolf family—it was a cornerstone, not just of Southern, but of Northern commercial life. They then travel to the slave forts in Ghana, where emotional encounters take place with African Americans on their own homecoming pilgrimages. They journey to Cuba, discovering the ruins of a DeWolf sugar plantation. At each stop, family members grapple with the contemporary legacy of slavery, not only for black Americans, but for themselves as white Americans. They face their love/hate relationship to Yankee culture and privilege, and wrestle with how to take public action given all that they now know. The issues they are confronted with dramatize questions that apply to the nation as a whole: How do we truly come to terms with the history of slavery and all the harms that remain? How does Northern complicity change the equation? What would repair – spiritual and material – really look like and what would it take?

Traces of the Trade premiered at the Sundance Film Festival in 2008 and then aired nationally on PBS’s P.O.V. series to critical acclaim.  It has been used as a catalyst for dialogue in countless schools, congregations, and communities since it was released.

“A far-reaching personal documentary exploration of the slave trade… The implications of the film are devastating.” – The N.Y. Times

“Traces of the Trade will help those of us who are custodians of history, translators of history, to bring a central, but buried chapter in our American story powerfully to the fore—all while penetrating right to the heart. I can’t recommend the film enough.” – Lonnie Bunch, Director, National Museum of African American History and Culture, Smithsonian Institution