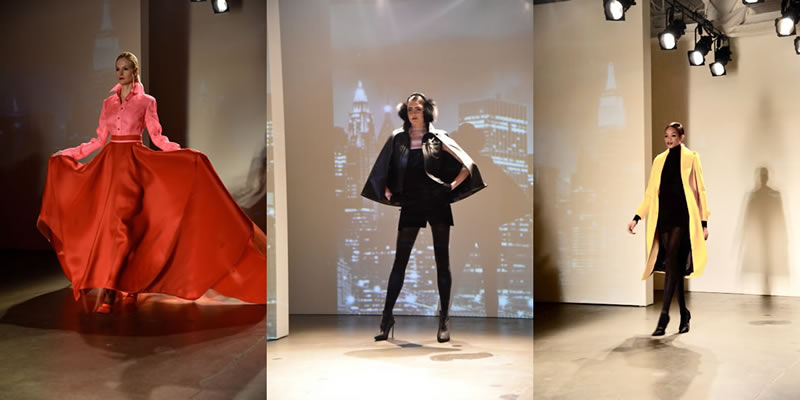 Anyone who is familiar with Zang Toi knows few people love the United States and New York City more than the famed designer. The 58-year-old Malaysian born Toi came to the States 38 years ago and has become the darling of the fashion world.

His youthful looks, wide smile, and effervescent personality are part of the Zang package-but it’s his perfectly constructed and tailored clothing that keep the clients coming back decades later. He counts the Trumps, Marla Maples, Kimberly Guilfoyle, and dozens of socialites as friends while globetrotting the world fitting royalty and fashionistas.

His show on Saturday Feb 8, 2020 which gathered Rudy Guiliani, Marla Maples, and Carol Alt was atypical Zang; instead of the usual classical music he went all out with Jay-Z’s song “Empire State of Mind” opening the show and continuing with a host of other hip hop songs celebrating his favorite city.

The show’s first look featured a black caped model with fur earmuffs set against the New York City landscape-this was all New York attitude. The collection was downtown art scene meets Upper East Side socialite-combining black and grey furs with cashmere, suede and leather for the ultimate “I can afford to look this trendy getup.”

Nobody is more meticulous than Toi: you will never see a hair out of place or an ill-fitted ensemble on his runway.

The luxuriousness of his fabrics were readily evident from any seat in the packed venue. While Zang is famous for his decorated collars and lavish trains this collection was more understated; and nobody does below-the-radar elegance better.

Moreover, there was plenty of color with pink, orange and blue colored stillettos an added whimsical touch, especially when coupled with the bold electric blue, taxicab yellow and shocking orange clothing. One of my favorite signatures of his is matching the inside of a jacket with a bow or a cape in an alternate shade-a dramatic touch that was executed perfectly.