An all-Asian cast that is not an action film? – first time is 25 years. A romantic comedy-drama poking at their American counterparts?

A handsome Asian asks his girlfriend, an NYU Economics professor to accompany him to Singapore for his best friend’s wedding. What she doesn’t know is that he is not just drop dead gorgeous, his is among the richest families in China.

Our good friend Lucia Hwong Gordon was our guest but her real reason to attend was that her mother is one of the stars of the movie (Lisa Lu). After the screening at East Hampton Cineplex, the guests went to the after-party at the Maidstone, hosted by Peggy Siegal and Warner Bros. We saw and talked to Michael and Laurie Gelman, Rosanna Scotto at the party.

Our favorite line – talking about not wasting food – “Remember there are poor starving Americans over there” This is a dig on the term used decades ago – don’t waste the food remember there are starving people in China. 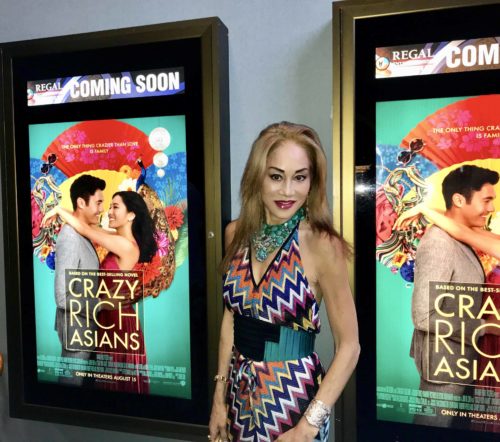