By Pamela Smythe-Woods with Adrianne Frost

Diving Into Hampton Water sounds like a plan for Summer weekends… But it’s not a jump in the pool that’s so tantalizing, for Rock And Roll Hall of Famer Jon Bon Jovi – and his son Jesse – it’s a distinctive rosé wine that they’re bottling in France and bringing to the Hamptons. 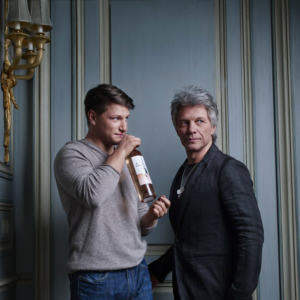 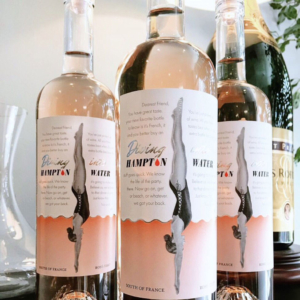 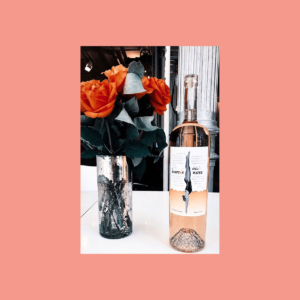 Jon Bon Jovi started heading out East 13 years ago, “I bought the house [in East Hampton] and never looked back. This is our favorite place on the Earth to be. I love it here.” The idea for the rosé began light heartedly about two years ago, when Bon Jovi and his son, Jesse, were chilling on their Georgica Estate, enjoying a glass of rose or as they used to call it, “pink juice.”  Joking, Jesse suggested they call their favorite beverage, Hampton Water. Voila! This fresh, lively elixir, a blend of Grenache, Cinsault and Mourvèdre, was born.

Launching a rosé was no joke for Jon Bon Jovi who confesses he almost dismissed the idea at first but, living on a prayer, he and Jesse decided to go for it. Long infatuated with rosé, Jesse explains, they’d bring cases and cases of it to the Hamptons, drinking it, he says, “before it was cool.”

The concept began with the label design, Jesse and his college roommate, Ali Thomas, came up with something a little bit retro and a whole lot of fun.  But it didn’t take long before Jon and Jesse were jetting back and forth to France enlisting winemaker Gérard Bertrand to help them make the perfect rosé. This convivial partnership is based on love,   Jon Bon Jovi says “a shared love of family, food, friends, and of course, great wine and great music.”

Gérard Bertrand hosts a jazz festival at his main wine estate, Château l’Hospitalet, each year. “For me the connection between wine and music is organic,” he observes. Himself a passionate advocate for environmental conservation and a leader in biodynamic wine production, Gérard Bertrand found that working with Jon and Jesse came naturally. “I want to create a link between the emotions that spark off a great song and good wine. They elevate each other.”

With 130 million albums sold and hits that keep on coming,  “Wanted: Dead Or Alive”. “Livin’ On A Prayer”, “It’s My Life”,  Jon Bon Jovi is undoubtably a legend in the world of music. With his son, Jesse, he may soon become just as famous in the world of wine: they are both Diving Into Hampton Water headfirst. The 2017 bottling is already sold out (at $25 a bottle), but more cases are being air freighted from France, stock up as soon as it arrives, it’s No.1 on the charts and rocking off the shelves.